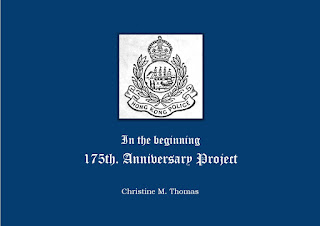 Captain William CAINE of the 26th. Regiment of Foot was appointed Hong Kong's first Chief Magistrate in April 1841.  His duties included overseeing the Police, Magistrates Court and Gaol with his staff being recruited from the ranks of the military.  This situation was far from ideal as many of the soldiers who volunteered for police service were coming towards the end of their service. Whilst their regiment had been stationed in Madras many had married local ladies and that is where they were hoping to spend their retirement.  What Hong Kong needed in the way of police officers were men who knew about policing and who were willing to commit to the Colony.

Early in 1844 the Colonial Office was approached with a request for three experienced policemen whose job would be to establish the Hong Kong Police Force in a proper manner.  In Hong Kong the ordinance governing the new police force was gazetted on 1 May - Ordinance No. 12 of 1844: Police Force Regulation Ordinance.

London's Metropolitan Police had been established in 1829 and adhered to a rule laid down by Robert Peel that the posts of Superintendent, Inspector and Sergeant should be filled by promotion thus creating career opportunities.  Sir John MOYLAN CB, CBE in his book "Scotland Yard and The Metropolitan Police" notes:

"In the general instructions to constables first place was given to a declaration that every constable might hope to rise by activity, intelligence and good conduct to these superior stations"

It is true to say that many constables did not make the grade and were sacked for drunkeness within days of joining, however, those that did stay the course and proved themselves good police officers were rewarded with promotion.  It was therefore the Commissioner of the Metropolitan Police who was approached on the question of Hong Kong's police.

Superintendent John MAY was in charge of the day to day administration of the Metropolitan Police and would have been one of the first to hear of the vacancies in Hong Kong.  What a great chance for one of his sons to make a name for himself.  Charles was the eldest son and serving as an Inspector in the East End of London - in his father's eyes the perfect candidate to head the new force.

Charles then recommended two sergeants from his own division to accompany him on the mission:  Thomas SMITHERS and Hugh McGREGOR.  The three officers resigned from the Metropolitan Police on 7 October 1844 and boarded the ss Oriental for the five month voyage to the Far East. 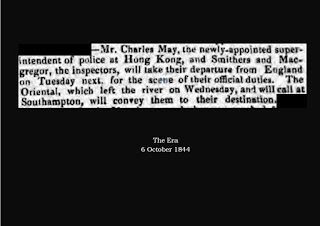 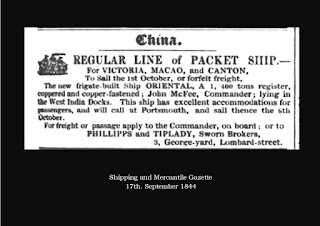 Their voyage did not get off to a great start as the ship was delayed at Portsmouth for a week.  Then on 15 October she ran into extremely heavy weather in the Channel forcing them back yet again.

The Oriental was not the only ship to be affected by the weather on that stormy day in October 1844.  Louis Philippe, King of the French, had been visiting Queen Victoria at Windsor and was due to return to France from Gosport on the very same day.

"Even before the arrival of the Royal party in the Victualling-yard the rain had already commenced to fall heavily and the circumstance of a vivid flash of lightning accompanied by a long roar of thunder occurring just before their entry was the cause of some curious observations among the superstitious.  While the Queen and King of the French were waiting in the superintendent's offices the rain, far from abating, increased in violence and this together with the tempest of wind which arose at the same time compelled the company admitted into the Victualling-yard to fly precipitately to any place they could find for shelter.  The soldiers, however, continued to stand in their position exposed to all the pelting of the storm which was so furious that it was impossible for anyone to remain in it for one moment without being thoroughly soaked through.  After some time the soldiers received permission to shelter themselves under the sheds and buildings in the yard; and of this permission they availed themselves with such alacrity that in a moment the Victualling-yard, which they had previously covered, was left a completely void space.  Notwithstanding the sad plight in which the poor fellows appeared to be in from the drenching of the rain there was something so ludicrous in the rapidity with which they scampered off for shelter that one could scarcely suppress a smile."

As there was no sign of the storm ending it was decided that Louis Philippe should return to London from where he could catch a train to Dover and so onwards to France via a safer route.

The Oriental rode out the storm and eventually sailed from England on Thursday 17 October.

History books record Charles's subsequent career in some detail but include little about his two colleagues. Thomas and Hugh, get nothing more that a cursory mention yet each played their part in the establishment of the Hong Kong Police and each had a career and family life to be proud of.  The following biographical notes attempt to fill some of the gaps left by more formal writings.